Explore Latin music songs and instrumental repertoire by examining culturally authentic musical elements and expressive qualities. Consider how pieces can be adapted to represent an authentic Afro-Cuban musical style through arranging and composition. 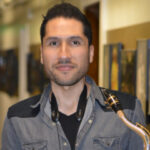 David Urquidi is a saxophonist, composer, and arranger from Los Angeles, California. Urquidi’s professional music career began at age 16, when he formed his own band and began to play in the LA music scene. He attended USC School of Music, where he was the Assistant Director for the USC Latin Jazz Ensemble “ALAJE”. Upon graduating, Urquidi quickly went to work with many of the top names in the music industry.

In addition to performing and recording, Urquidi has composed and/or arranged for such entities as Showtime, Netflix, Facebook, and Andy Grammer. David Urquidi is a Yamaha and D’Addario Woodwinds Artist and Clinician.